The stories behind some of the bespoke commissions undertaken at Veritas are fascinating and bring the projects and designs to life. Like the precisely re-created cockerel presentation pieces which we make for Tottenham Hotspur Football Club.

The cockerel has been synonymous with Tottenham’s identity since 1909 when a former footballer, James Scott, made the original statue and presented it to the football club as a gift. But why a cockerel?

The origins of the cockerel and the nickname Spurs, are, in fact, the same. They both begin with Harry Hotspur, his use of his riding spurs and his love of cockfighting. He was a member of the powerful aristocratic Northumberland family, the Percys. They were the massively influential northern earls, without whose support many English kings stumbled and cowered. It was the Percy family that owned the land on which the football club was built.

In 1908, the statue of the golden cockerel made its way to decorate the West stand of the Club, and the nicknames stuck.

Our minutely worked replicas include more details than you would realise at first sight. If you look carefully, you can see a little dent in the side of the football on which the cockerel stands. 3D scanning has enabled us to recreate the contours of every centimetre of the original piece.

A story circulated that the dent in the original statue was the result of wayward Nazi bombs during the Blitz in the second world war. But the real story is more mundane and, in fact, funnier. Tottenham’s legendary star of the 80s, Paul ‘Gazza’ Gascoigne, was the real culprit and the dent was a bullet mark from an air rifle the star let fly at the statue – oops! 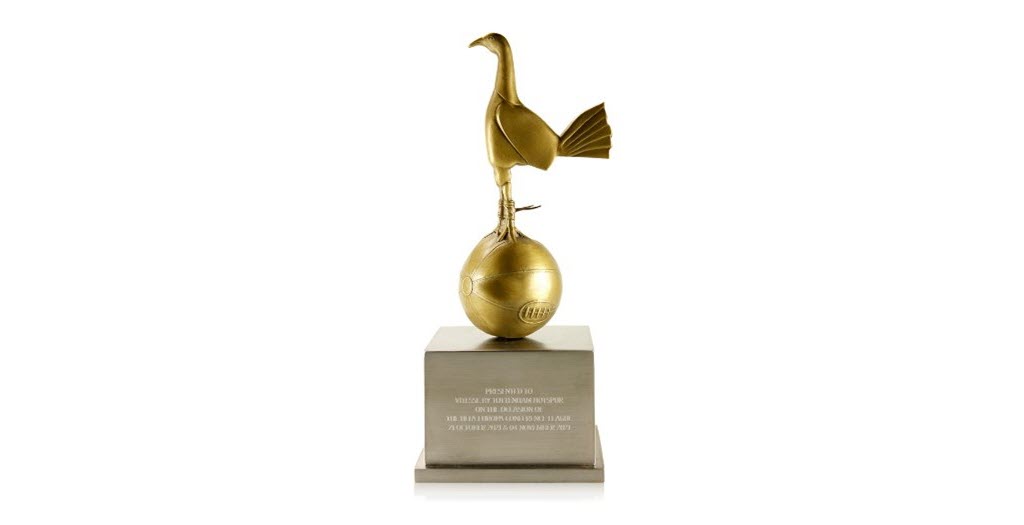 These days the finally worked cockerels are delivered by Veritas to the club and used as presentation pieces, like the one shown above presented to Vitesse on the occasion of their UEFA Europa Conference League clash in November 2021.

The silver cannon award which Veritas makes for Tottenham’s north London rival, Arsenal, couldn’t been more different from the former’s bronze Animalia style design. These stunning silver cannons are in some ways more akin to traditional silversmithing with their highly polished and bold military looks.

The cannon itself has been on its own journey and metamorphosis from the first time the football club developed a crest in 1905. In that year, an article about the Woolwich Arsenal Football Club appeared in “The book of Football” written by the club’s vice chairman, Arthur Kennedy. It featured three cannons side by side taken from the Woolwich Borough’s coat of arms and the same Latin motto, “Clamant nostra tela in regis querela”, meaning our weapons clash in the king’s quarrel.

But following the club’s move north to Highbury in 1913, it was not immediately apparent that the club would embrace its Woolwich Arsenal legacy and keep the cannon as it’s recognisable motif – and in some ways it was the dark clouds of war again that came to the rescue of the cannon. For four years, football seasons were interrupted as the cannons roared in mainland Europe and when the world emerged and staggered, shell shocked into the 1920s, the single cannon again appeared on the club’s letterheads for the 1921/22 season.

Despite some occasional volte-face movements – sometimes pointing west, then pointing east and finally west again, the cannon has remained central to the Arsenal crest and brought with it the football club’s nickname, the Gunners. The derivation of the word to Gooners is, in fact, only a different pronunciation of the original, though there is a suggestion that it also refers to the occasionally high-spirited behaviour of Arsenal’s fan base. 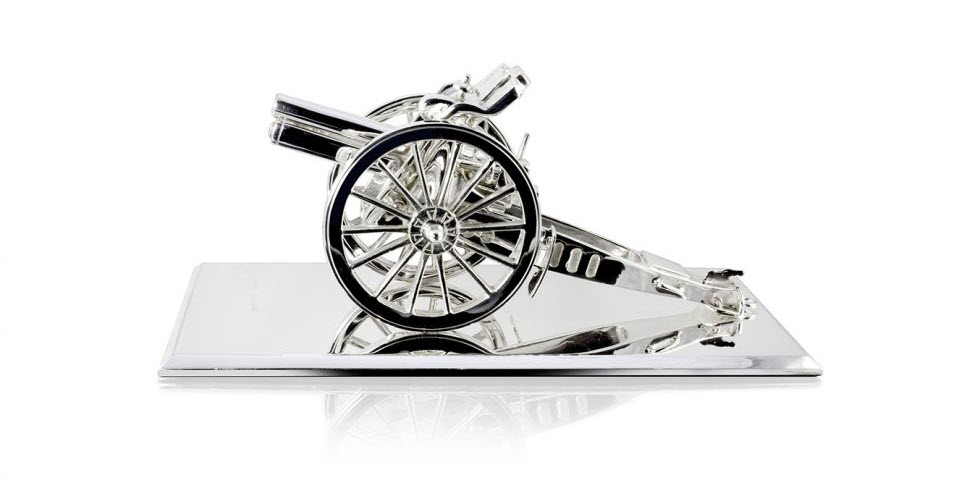 The beautifully reproduced silver canons, each one carefully prepared by Veritas, embody a whole century of history, from that small group of 20 factory workers in 1905, to the modern, unbeaten Invincibles squad of the 2003/04 season.

The stories behind the special commissions that Veritas is asked to complete are extraordinarily personal and important to our clients.

They reach deep within the DNA of different groups of people, and their visual impact tell a tale more powerful than words alone.

If you would like to find out more about how to create a bespoke commission, our team at Veritas would be happy to chat through the process.

If you would like more information, please contact us using the details below or use the enquire button